Hitting the roads in South Oxfordshire driving the rather special Audi S5 Sportback and A5 Sportback. Playing on the sound system, Ed Sheeran and his latest hit: Castle on the Hill, Norfolk police have wrapped him for his use of excessive speed in the chorus lines without him even getting in a car.

“I’m on my way, Driving at 90 down those country lanes Singing to “Tiny Dancer” And I miss the way…”Ed Sheeran - Castle on the Hill

I am not an advocate of 90 mph on the back lanes, but get into the latest barnstorming A-road express from Audi the S5, the Bang & Olufsen sound system on and hit the local roads.

The Audi A5 Sportback is now better than ever, sharp in every way and I am totally enthusiastic about it, this car is right up my Strasse. I would it find it hard for anyone to not to be a fan of these cars, the popular, versatile, big comfy Audi A5 range has now been expanded and is now available with the new Sportback 5-door hatchback model. The A5 Sportback has all the looks, comfort and performance one could need. The distinct A5 shape has intelligently evolved, leaving the successful recipe intact.

Across the range, on average, the New Audi A5 Sportback is a significant 85kg lighter, it now boasts more power, up 17% and fuel economy up 22%. The bodywork is enhanced with some real finesse, with the crispest lines in the wings, doors and bonnet. So sharp you can only agree this thing must be aerodynamic. It is, with a 0.26 drag level, making it quieter than before with the lowest NVH in its class.

Audi tells us, premium car buyers now want what they want, not what they might want; No longer being content with a compromise. The A5 range now offers quite a choice with a coupé, Sportback, Cabriolet and S models of each. 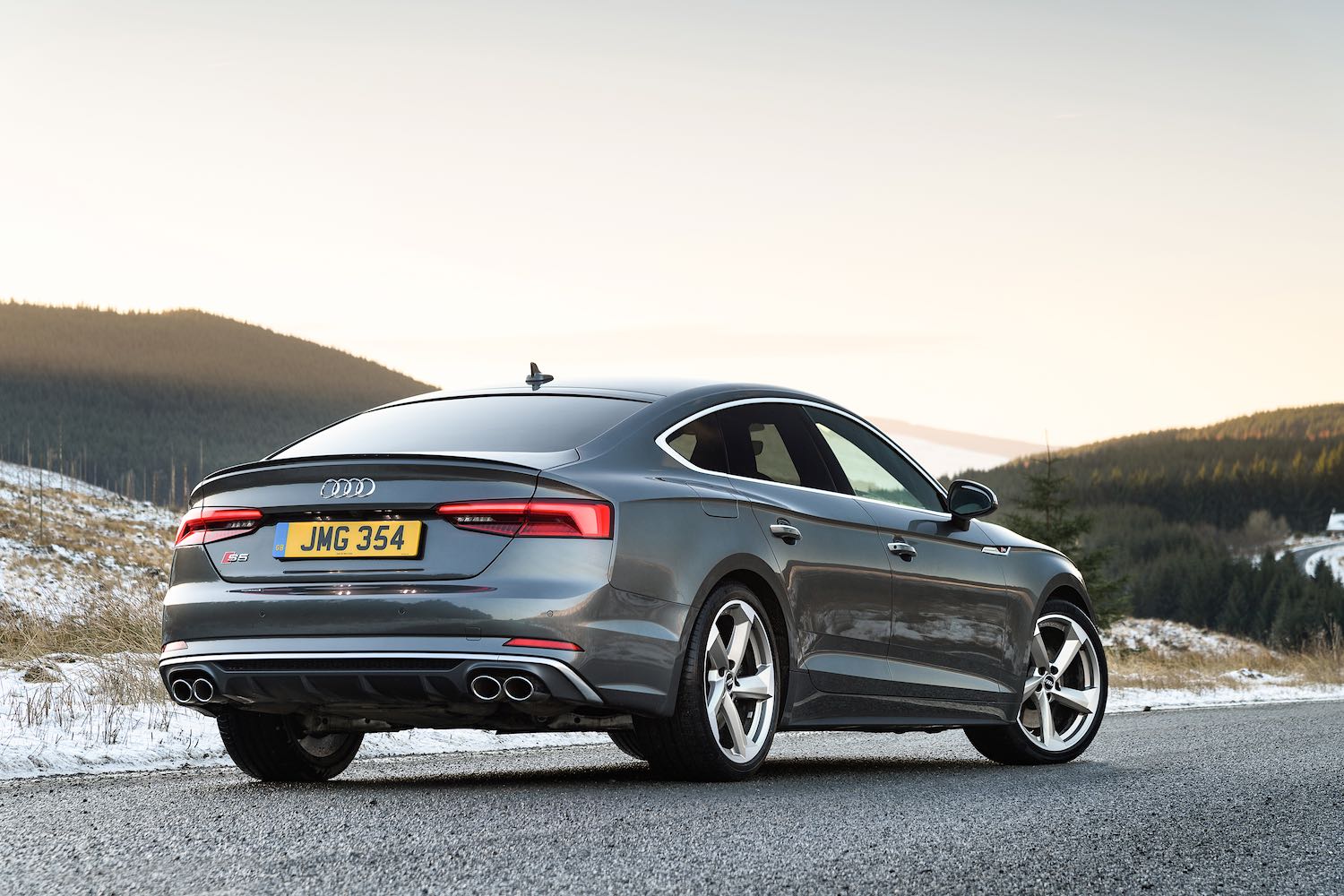 More than sufficient was the top of the range S5 Sportback with its 345hp and a 0-62 time of 4.6 seconds and a limited top speed of 155mph. The S5 has the 8-speed tiptronic transmission, use it in conjunction with the paddles and county crossing driving is just a pleasure. This car is more than pretty brisk; rapid acceleration is instantaneous, an on or off affair, overtaking is quick and easy.

“Ninety miles an hour down a lovers lane, On a tank of dreams”.Trisha Yearwood, Walkaway Joe.

The car brilliant in the dynamic mode, however switching from this mode to comfort or efficiency actually made the car more docile, and less frustrating on busier road sections. Perhaps I would manage to retain my licence to drive another day. You may find a more involved drive in some of the German competitor’s stables but, it’s about, looks, comfort, how it makes you feel in combination with effortless performance. It’s no longer just about G-forces and velocity in a family car.

There is a glorious class leading five-seat interior, with a fit and finish that is exemplary, combined with the best detailing and best feeling materials throughout, there are 30 colours available just for the ambient lighting! The cars can be specced with the virtual cockpit display which is another worthwhile but expensive choice. Instruments are all at hand, the brightest and crispest white typography on the displays and all switches and controllers are slick and easy to get comfortable with.

You would only be buying the A5 Sportback if you wanted more space above the A5. The large hatchback boot offers the most load space in its class with 480 litres. The enormous rear tailgate is powered on some models as standard and features the easy opening method of waving your foot at a sensor under the bumper.

All of the models were highly likeable, and some were clearly more sensible but if comfortable performance is your bag you cannot go to wrong here. The only model without the quattro awd system is the front-wheel drive 2.0 ultra Sport, the entry model but the car is so good looking anyway and it is a well specced, comfortable car. Alas, the added allure of the quattro badge would always be in mind.

The favourite for me was the 3.0 TFSI quattro S line 7-speed Sport S-tronic, altogether a pretty lively family car without being too brutal. Although, budget permitting, as is typical with Audi cars there is something quite addictive about the Jekkyl and Hyde personality of the S5.

Audi it seems always has the right car for you.