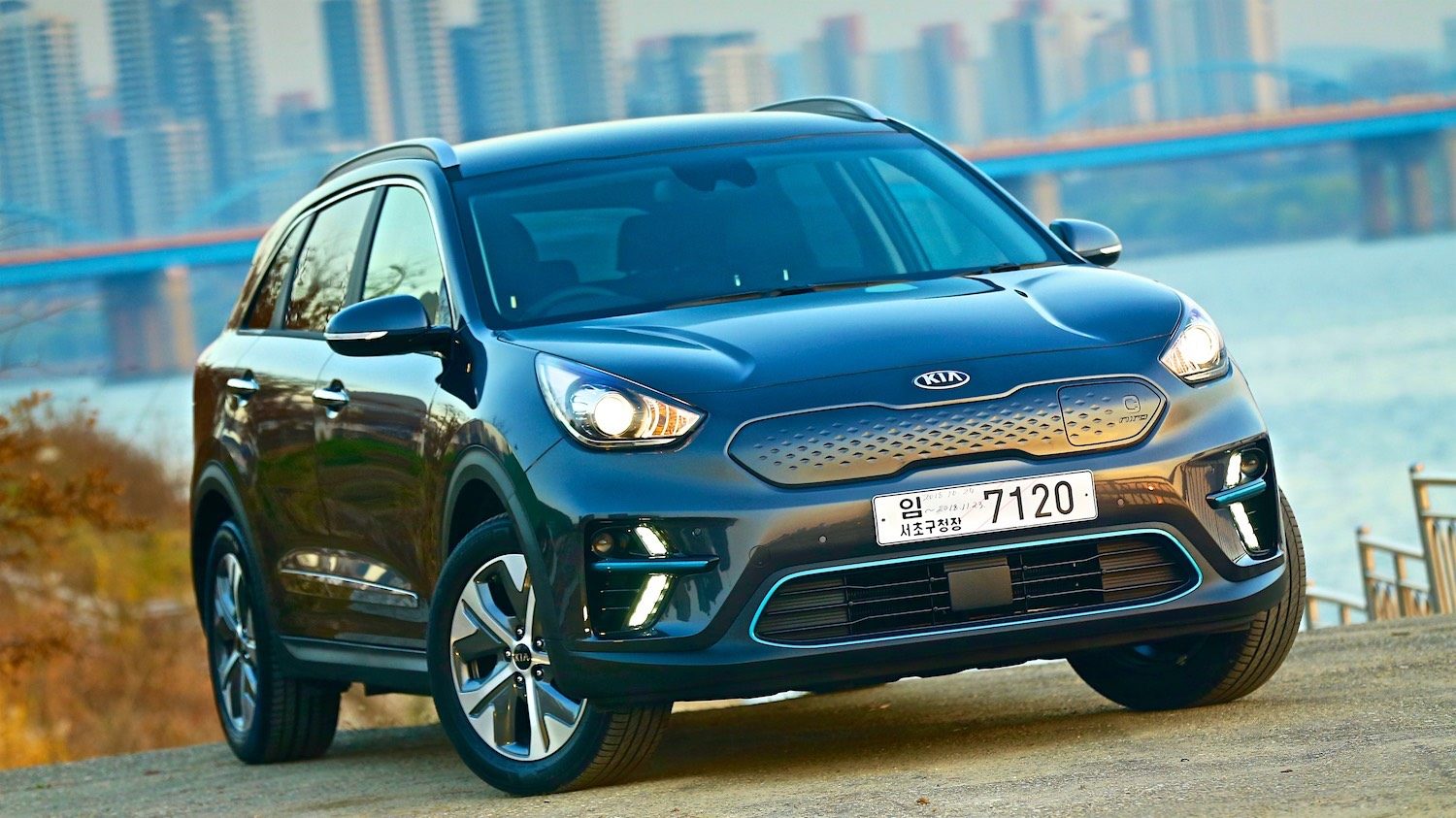 Day by day, more and more electric vehicles are being announced, but this month the choice just got a lot better. The Kia e-Niro is coming soon.

It was a long way to go to test a family car, and we travelled to Seoul, South Korea for the first drive of the important Kia e-Niro compact family SUV. The new fully electric crossover Niro a whopping 282-mile range, but without a far-fetched price.

Of course, we took this range ambition with a hint of disbelief and a pinch of salt, but we gave it a real-world test it on a 5-hour drive through South Korea and put it through its paces, motorways, country routes, war zones, more hilly bits and lots of city driving.

Could this be the first fully electric SUV with an anxiety-reducing range? If so this car would make driving electric a sensible choice for many families.

Not just another day in the office. It’s not every week you get to hang out in the vibrant tech city of Seoul, South Korea, also the home of some rather select car companies, Gangnam style, and K-pop. There is a buzz about the place and for this car, it was quicker to be flown to Seoul by Kia for the first drives than wait for them to arrive on our shores.

For an average English bloke, South Korea is probably not a place in Eastern Asia I would visit under my own steam but on this lighting trip, it was an enjoyable, eye-opener to this world leading digital city, the warm nature of the Korean people, with a vastly different culture to our own and to see strength of the Kia brand on its home turf.

With just 40 hours in Seoul, we managed to cram in a visit to the Kia global headquarters. It was interesting to meet and hear a presentation by Peter Schreyer, the man who until very recently was the Global Head of Design, his design-led approach credits him with the look and feel of the entire Kia range. Schreyer is now a consultant for Kia.

“The SUV is now the normal car style now..and there is still a lot to do”.

Practicality, higher seating and safety, are the key reasons behind the body choice for e-Niro and not driving off road . This car doesn’t have the crazy, groundbreaking ‘strange, it must be electric…’ look that some ev’s have been saddled with, e-Niro is conventional in many ways. The e-Niro bodywork features blue accents around the exterior and has the look of a stylish practical family car electrified with a 64kWh lithium-ion battery pack charged through a port behind a flap in the car’s nose.

For our road test, we hit the South Korean highways in the Kia e-Niro, the vehicle was rhd as this was one of the demonstrator cars heading to dealers in the UK. The day was designed to prove to us the cars strengths and its real-world useful 282-mile range. Faced with the incredible traffic leaving Seoul, a city larger than London, the instantaneous and likeable surge from the motors made the car a pleasure to drive, with near-silent running, it felt more punchy than the 0-62mph time of 7.5 seconds, the whirr of the motors delivers a brisk performance more akin to a mild hot-hatch. The steering is light and easy. The e-Niro is a medium sized crossover and with a slightly command driving position which helped in the intense Seoul traffic.

This drive for us was to be a proper Kia e-Niro test drive, and we didn’t come this far for nothing. 282 miles is a lot for an electric car and the possibility is more than that in regular town driving. Back in the day, driving the first electric cars jokingly, I used to say to myself remember to wear two pairs of socks today. You just didn’t want the heater on using all that lovely ‘leccy’, NO, this trip was about heater on, heated seats on, sound system, sat nav, cruise control, air con, it had to be real. Although as strangers in our location, with just an app for language we possibly didn’t want to run out of power.

Driving for the first two hours out of the fantastically busy city, we headed to the town of Imjingak, the DMZ – at the southern end of the demilitarised zone, a strip of land dividing two nations at war. From this spot, you could see into North Korea, the home of the infamous Kim John Un, the North Korean Leader. It was an eye-opener to be in such a place, with a war still happening, but postponed. May longer-term peace prevail.

Behind the tactile white stitched steering wheel, to the left and right there are paddles to increase or decrease the level of brake regeneration, use them along the lines of ‘every little helps’, electric power is then harvested, saving a little here and there, as you slow for junctions, go down hills, generally braking the car. It does take a few miles to get used to and once you have the knack becomes just a part of driving the e-Niro. The handling is agile and precise, we aren’t talking sporty here, although acceleration is still brisk. The heavier batteries are placed lower in the car bringing a low centre of gravity which certainly helps make it a touch more dynamic.

Deeper into South Korea we headed to the Gloster memorial, the site of a terrible battle from the Korean War. The campaign was fought over a few days and is the site of Gloster Hill, a place that the British managed to hold during the fierce conflict, and sadly it did result in many British casualties.

Driving electric for many has always been more stress-free then a regular car — the quietness of the electric powertrain and ability to listen to music or chat with passengers in a fashion is quite unlike conventional vehicles. The central 8.0-inch touchscreen brings connectivity with a ‘Kia style’ look and feel, always clear, concise, easy to operate and with a simplicity which is second to none.

Generally the e-Niro being electric, means quieter; however you may get more road noise on faster roads, one of the more important things, the premium sound system is by JBL and delivered a clean rounded sound with an external amp, subwoofer and central speaker also Apple Carplay and Android Auto both with voice control are included.

Inside the e-Niro, it’s as you would expect, a clean and modern look, black leather interior, premium quality hard and soft touch plastics with blue accents. The eight-way adjustable heated driver’s seat proved pretty comfortable over the days’ adventures. Not requiring a conventional gear lever the e-Niro has a rotary style gear selector which sits on a neat panel within the console, as there is no longer the need for a transmission tunnel, this area now includes a larger storage area and ahead of the wireless phone charging. Inside the car, ambient lighting is available in a choice of six colours illuminating it subtly at night.

Included in the price of the highly specced e-Niro, there is a multitude of extras, the must-have reversing camera, cutting-edge safety systems and driver assistance tech much of which, just works unobtrusively for the driver. The only optional choice available for the car is which paint colour you would choose from a palette of six.

After our long day driving the car on considerably varied road conditions, we still had 58 miles of charge left, the day was a genuine success for the e-Niro.

It is likely for many drivers; this new electric Kia could require just a weekly charge. Charging is a straightforward affair with an opening flap in the front grille, using a 1000kW fast charger. This means an eighty per cent charge can be done in just 54 minutes. On a home charger, overnight would be necessary, but this can all be set to make the most of a cheap tariff. A visual reminder light is integrated into the top of the dash to show when the car is charging or fully charged.

Not a week goes by without a manufacturer announcing something electric appearing in their range, it’s also clear that many are still a long way from availability.

The Kia e-Niro is available in the UK from April 2019 with an on the road price of £32995, don’t forget to take on board the reduced running costs of driving electric.

Oh, I almost forget the world-beating Kia Seven year warranty, 100k miles and even better to have the assurance of such a guarantee covering the batteries and motor.

‘I drive way too fast to worry about cholesterol.’ – Author Unknown The answer is always yes when you get an invite to drive two McLaren supercars back-to-back at the legendary Millbrook testing facility  It doesn’t matter what else is going on; you clear the diary and make sure you go, as opportunities such as this don’t come around too often. So, when McLaren invited me to their… “Now you just stay there,” my wife affectionately admonished the new Honda e… As she came through the front door of our house and clicked the remote to lock the car on the remote which was standing outside. Seeing her family smirking, she said shamefacedly, “You can’t help but anthropomorphise that car. Next thing, I’ll…